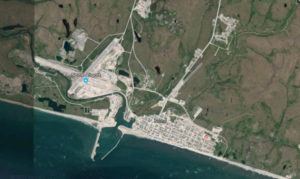 I’ve lived in Alaska a LONG TIME.  Sixty Three years minus a few months to be exact.  But I still haven’t 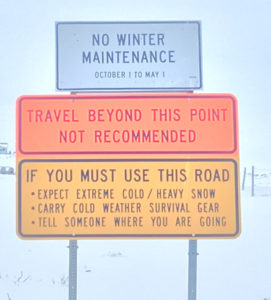 seen this state, it’s just too big. This is my first trip to Nome.  My daughter Tamara took me on a quick tour of the town last night on the way back from the airport.  I grew up listening to Ranger Rick and Sailor Sam on KICY, Nome Alaska and have always wondered about Nome have never visited.  I just arrived last night after a 1 1/2 hour stop over in Kotzebue.

I came prepared for cold weather but find I’m overdressed for the relatively warm 15F.  This will be a good day to watch the Nome-Golovin 200 Race though…not too cold. This year is the 51st running of the race.  That’s the oldest continuous snowmachine race in Alaska.  It’s even older than the Iditarod Race which finishes its 45th race here in just a few days. The clip is of one of the returning racers. The winneer made the run in less than 2 1/2 hours.

Most houses are on pilings to keep the permafrost from thawing out. There are a few houses with garages 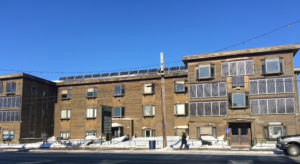 and those had a ramp up to the garage which is also built on pilings. What I can’t figure out is how they keep the city water and sewer from thawing the permafrost.I saw a lot of solar panels around town. One three story building had many south-facing panels. There is also an array of windmills outside of town that appear to be idle.

I’ll take  more photos while I’m here.  This is a very unique and interesting town in many ways.  At one time it was the largest city in Alaska with a population of more than 100,000.  The current population is less than 4,000 but it still is the main hub for the Norton Sound region.  It has many modern buildings along with some very old one’s. It has miles and miles of beaches that still hold enough gold in the sand to entice people to

I’ve met many people who love it and consider it home.  As they say, “There’s no place like Nome”.