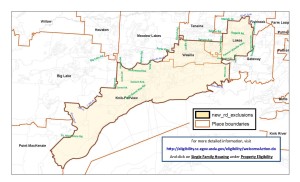 Now, since October 1, certain areas are no longer considered rural as far as the United States Department of Agriculture,(USDA)is concerned. Yes, the USDA administers a mortgage loan program for rural areas of the United States. Anchorage of course does not qualify, but much of the valley does.

Recently, a map was produced to show the areas that did not qualify for this program. The Wasilla and Knik-Fairview areas were high-lighted in a recent census as the fastest growing areas in Alaska. Apparently this caught the eye of the USDA because that is the area that was disqualified.

Here is a link to the map on USDA’s website. Hopefully when the government is running again it will work. Here is a adobe image of the map rd map

If you have any questions about the Rural Development loans to see if you might qualify for this zero down program give us a call.