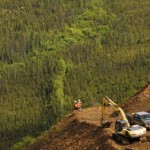 While the news focuses on the upcoming presidential election and the national economy a governing body that directly affects us here at home is quietly at work. Last night was another Borough Assembly Meeting. You can hear Mayor Devilbiss’ report here. I attend occasionally but when I can’t be there I try to listing to the “Mayors Minute” to get a synopsis of the meeting.

A presentation by Donlin Gold mine north of the Kuskokwim River was a highlight of the meeting. You ask what that has to do with us? Well, we are a bedroom community for the state. People in Wasilla and Palmer work all over the state and many of them work in the mining industry. In fact, my own daughter has already done some work indirectly for this mine.

A way it directly affects us is the probability that they will install a 14 inch gas pipeline from the Mat-Su Borough to the mine site. They need energy for their power plants. This will go through the Alaska range to the Kuskokwim River. This will be the first supply of natural gas to this area.

The ferry is a quandry for the assembly. They are still trying to figure out what to do with it. Can they put it to work? Can they sell it? Are there buyers? Many unanswered questions remain as the ferry sits in storage to the tune of $60,000 a month. They put off the decision until September.

Should we change the date for the borough election to coincide with the national election in November? or the Anchorage election in April? or leave it in October? The answer to those questions were postponed until August.

A decision was made to change it into a community center/ski hut. Funding has mostly been secured thanks to work by assembly member Jim Culver.

There were several properties with residences on them that were taken off the foreclosure list. It sounds like most of the properties that were foreclosed were vacant land. Be careful buying a foreclosure from the borough. There are rights of redemption for the original owner that survive the sale for some years.

The assembly passed a resolution opposing Proposition 2 on the upcoming statewide election in August. This proposition would install a very restrictive form of coastal zone management that would delay or perhaps even stop resource development in the areas effected which is most of Alaska. This is a proposition supported by the likes of Greenpeace and their allies.

There were many other issues discussed, I encourage you to become involved in the assembly election process and occasionally attend these meetings to show your support for and against the important issues that are decided here.