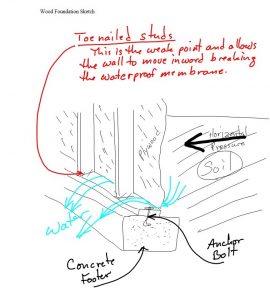 Buyers are often surprised to find a wood wall above the concrete footer when they venture down into the crawlspace of a house. Wood foundations were common in houses built in the valley in the early 1980s. But very few builders use them anymore.

The reason Treated Wood Foundations are not used is because they are now feared by most home buyers. I believe this is because most of them were installed incorrectly when they were used so extensively in the early 80s.

I would say that about 1/3 of the houses built from 1977-1985 in our area used treated wood foundations. Almost all of those have failed to some extent. They failure, if you want to call it that, is usually just a small movement of the foundation inward. That is a lot of houses because we experienced a building boom at that time.

We had a real estate crash in 1985 that put a halt to almost all new construction until the early 90s. By that time enough of the foundations had already failed to scare buyers from them. Now, a lot of buyers won’t even look at a house with a wood foundation.

Here is how they were constructed and why they failed. First, the area is excavated and a concrete footing is poured about 4 feet below ground level. Then a treated sill plate is anchored to that footing. Upright 2×6 studs are toe nailed with galvanized nails into the sill plate to bring the height of the floor at least 6 inches above grade. The outside is sheathed with treated plywood and then waterproofed. Fill is then placed against this wall up to grade.

The problem is a that a wall built this way is not strong enough to withstand the horizontal force created by the backfill constantly pushing against it. Our ground freezes and thaws every year and ice expands when it freezes. The weak spot is where the studs are toe nailed to the sill plate. I can almost guarantee that every house built this way has the studs sliding back over the sill plate at least a little. It only takes a little movement to break the waterproof membrane down near the top of the footer. If there is any water collected in that area it will make it’s way into the crawl space. This water creates more problems associated with excess moisture in the house.

The good news is that many, and probably most of these foundations have been repaired by now. The repair generally entails some or all of the following:

1. Excavating the exterior perimeter.
2. Repair the damaged water proofing.
3. Strengthen the joint between the studs and the sill plate, usually by anchoring a treated 4×4 kicker to the footer just inside this joint.
4. Adding a drain tile at the base of the footer to drain away any water collected there.
5. Carefully backfilling with well drained gravel.
6. Grading so that there is a positive slope away from the house at all sides for at least ten feet to help water drain away .
7. Installing gutters to keep water away from the foundation.

I have not noticed any problems with the houses that have been adequately repaired. Hopefully they will be fine as long as water is kept away from the house…because as we all know, water becomes ice in the winter, and ice expands when frozen.

Here is a photo of one that has had a 4×4 kicker plate installed to strengthen the joint between the studs and the sill plat. 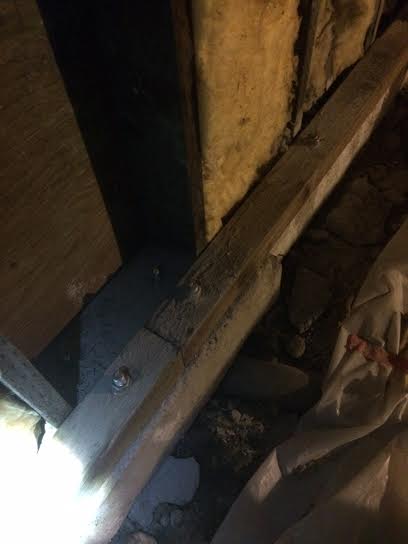